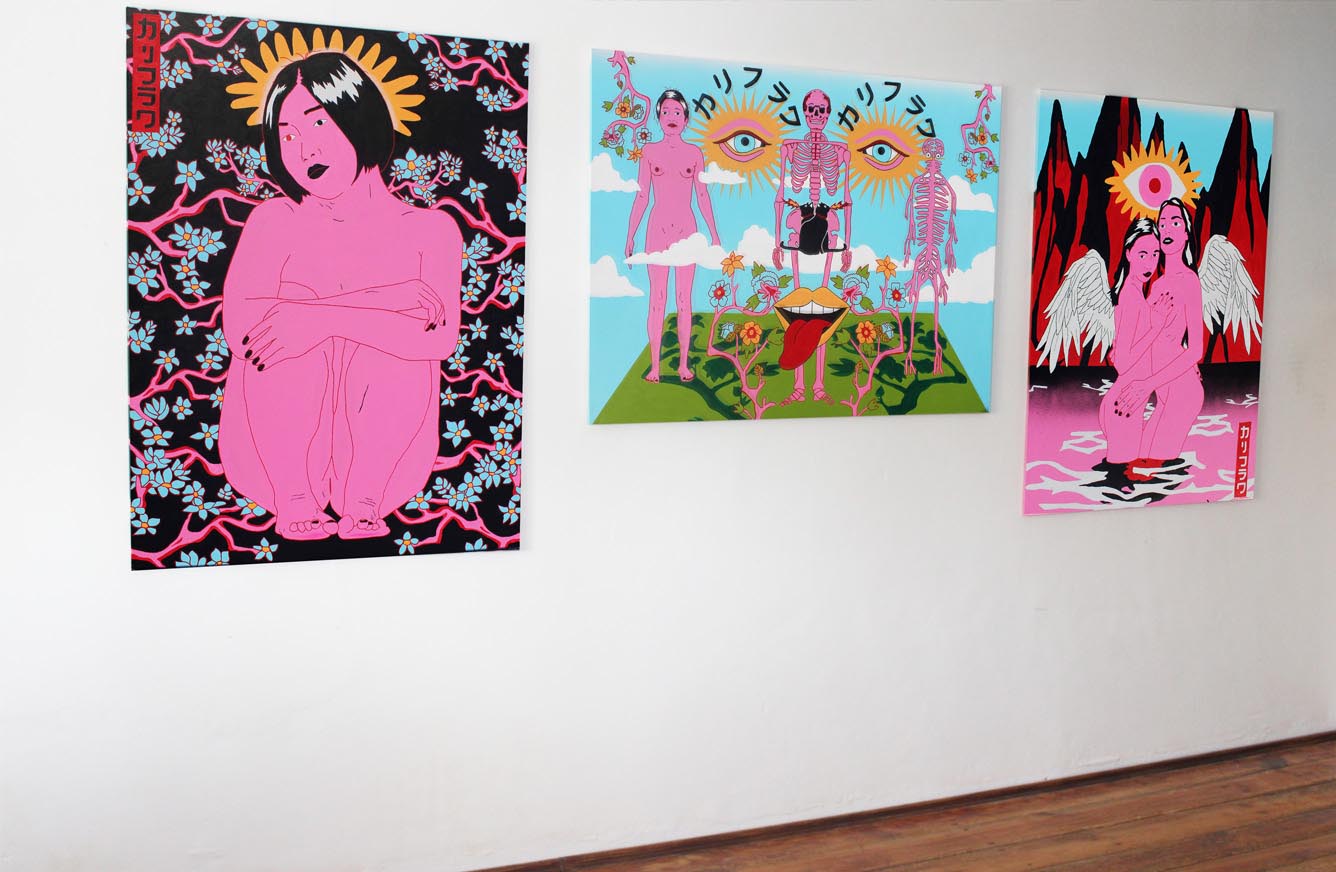 A review of my works after the Kromatic Art exhibition at the MADS Milano gallery by the art curator Alessia Di Martino.

“Art does not reproduce what is visible, but makes visible what is not.” (Paul Klee)

Having to describe the art of Karifurava, polish artist born in 1992, the unique andjective that comes to mind is challenging. The art history teaches us like the historical and social contest is a fundamental part of art criticism and of the artistic production which spreads from that. The only costant that does not depend time is the heated debate between what has been accepted as art in the course of time and what has been defined as scandal. Just think of the compains made from the Middle Age onwards against the paintings that showed nakedness or rough scenes. Though we can notice how in Ancient Greece was normal to show scenes of orgiastic sex life. Mentioning only some of the artists that angered the criticism, as Bosch, Michelangelo, Caravaggio, Courbet, Manet, Schiele, Manzoni and Cattelan, we can understand how on the one hand exists an harsh reading towards the works, on the other we can consider how it is this shocking event that made them some of the greatest geniuses of art. Talking about the works of Karifurava, we can understand how these arise in the audience a series of conflicting emotions. Looking on Dualism we are faced with two nude female figures, in provocative attitudes. And is not this the aim of art, if not to provoke? Sure, some may be scandalized by such a work, but if we look at it in its context, in our context, it is clear like this work has a satirical flavor towards a social reality where taboos on female sexuality still apply. The purity of woman is stained by original sin under the watchful eye of a reality that is always ready to cry out to scandal. The provocative nature of Karifurava’s art derives from the fascination he has for the art of the Japanese Toshio Saeki. His has been defined as a disturbing, grotesque art, the result of black humor and biting satire. With crude scenes depicting an exasperated eroticism, the Japanese artist highlights the sexual deviances of a sick society. Karifurava’s art is the bearer of this ideology, highlighting the psychedelic dreams of a perverse fantasy present in the human mind. Nurturing a strong interest in Asian culture, the artist offers us a cartoonist vision of a reality without veils, of a flow of unconsciousness that invades the human being. In the second work presented to us, First minute in the park, the reference to Japanese culture is clear, especially the closing ideology linked to the female figure. Today in Japan, and beyond, there are still social ghosts that relegate women only as the ‘’ sex that gives birth ‘’. The existence of these ideologies obviously influences other social issues for which women are not granted the same rights as men. Fortunately, there are strong social campaigns that fight this disparity, but one of the strongest means of denunciation is certainly art. Precisely for this reason Karifurava shows us a woman enclosed in herself that blooms among the flowering branches, a symbol of apparent beauty. The last work presented to us by the artist is Nirvana. Also in this case we are faced with the representation of the ecstatic condition of pure spiritual enjoyment, not concretely visible in everyday reality, but which unites every living being in its intimacy. The artist describes a dream world, far from any reality, in which the absolute protagonists are the senses and the psychological and mental emotions experienced during the moment of maximum pleasure. A seemingly free pleasure, but always observed by the big eyes of conscience. A female figure, a human skeleton and one of a mutant that abandons itself, melts before our eyes, showing its weak points. A very important element in Karifurava’s works are colors. His palette is made up of psychedelic shades, bright colors belonging to the world of fantasy, a place of absolute freedom where there is no type of censorship and the senses become the protagonists of an infinite journey.

Item added to your cart

Continue Shopping Go To The Cart
Buy for 300.00$ more and get free shipping